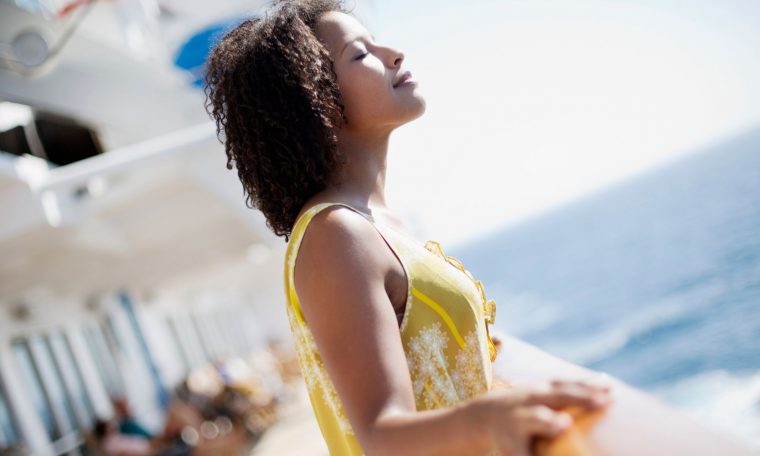 It’s no coincidence that “nauseous” derives from the Greek word, Vαῦς, for “ship.” If you’ve ever been on a cruise, especially in the middle of the ocean during winter, then you know exactly what we are talking about ― and it’s not pretty.

Cruising is supposed to be fun, easy. It’s supposed to be a mindless vacation, filled with a never-ending buffet, all-you-can-drink bar tab and open hot tub. But, if you’re one of those many vacationers sensitive to the movement of a ship, then you know how easily seasickness can ruin a good time.

Whether you’re in a car, on a plane or ferry, the causes and symptoms for motion sickness are the same. Even if you’re on huge boat with thousands of other people, it’s still possible to become nauseated from a few rocks of the boat. How is that?

According to WebMD, this happens when one part of your balance-sensing system (like your eyes, inner ears and sensory nerves) knows you are moving, but the other parts don’t.

For example, if your inner ears, which are responsible for balance, sense you are moving, but your eyes can’t make that connection while at sea, your brain senses a “conflict.” “That sensory conflict is believed to be the basis for motion sickness,” said Dr. Steven Rauch to SELF.

Fortunately, there are plenty of ways to combat seasickness. Here’s how things like the type of cabin, food and even posture can influence seasickness. Scroll through above to see our top tips.

A lot of people feel queasy once on board. Consequently, most cruise lines offer anti-nausea pills at their guest service counters at no extra charge. The motion sickness medicine will help until your body becomes accustomed to the movement of the ship.

A cabin with windows and a balcony will allow more air and light into the room, alleviating queasiness. Alternatively, an indoor cabin can exacerbate these symptoms.

The location of the cabin can do wonders as well. According to Cruise Critic, cabin location is “a question of engineering, really.” Choose a cabin lower and more central to the rest of the ship ― you won’t feel the ship’s movement nearly as much.

“The higher decks and cabins at the very front (forward) or back (aft) of the ship will rock and roll the most,” they said.

3. You can still manage in an indoor cabin.

While an outdoor/balcony cabin is better for those prone to seasickness, an indoor cabin might be okay. One insider insists the TV should be turned onto the “ship camera” channel. It “will create the illusion of having a window when you have an inside room.”

4. Invest in a relief band

It may be expensive, but a relief band could be your cure. Many cruise-goers insist on this small device, which fits on your wrist like a watch.

This FDA-approved device has been proven to stop motion sickness and nausea ― just remember batteries!

If you call room service and complain of seasickness, more likely than not they’ll send you up a bottle of ginger ale, saltines and green apples.

Vacationers swear by green apples. For many people, the sour taste is the cure for all sorts of motion sickness.

6. Your journey and time of year matters.

The rockiness of the boat can depend on the season or even the route of the cruise. Sailing across the Atlantic may face rougher waters than cruising in the Caribbean.

If you’re going to the Caribbean, it might best to avoid the summer or fall (aka hurricane season). You don’t want choppy waters, high wind or rain.

7. Keep your eye on the horizon

In doing so, your brain “can use the horizon as a point of reference.” It helps in reminding your brain that you are moving, solving the conflict between your ears and your eyes.

8. Go with a more modern ship

No, not for safety concerns. Big ships that were built recently were probably built with stabilizers. Also used in ferries, the stabilizers are used to help prevent sea sickness.

9. Talk to your doctor about anti-nausea medicine.

Some doctors believe that posture can influence how your body reacts to movement, like the rocking of a boat. If you’re feeling nauseous, try sitting upright or with a pillow to support the neck.